We have moved to www.chnaottawa.ca 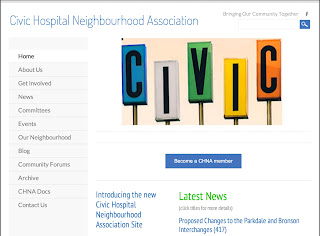 A message from the office of Councillor Katherine Hobbs follows:


Urban design consultant George Dark’s recommended development plan for the Preston-Carling district, one of the fastest growing neighbourhoods in the city, will be presented at a public information session on Tuesday, February 5.

This information session will be a chance for residents to see and comment on the Mr. Dark’s recommended approach for redevelopment of the Preston-Carling district, including project timelines, and to view the results of a recent public design charette. The Preston-Carling district plan was commissioned to ensure orderly development after the City received a number of applications for major developments in the area.

The charette was conducted by Mr. Dark and resulted in a model showing possible buildings, greenspace and transportation links. After the public information session, City Planning staff will review the public comments and present their recommendations to the City’s Planning Committee and Council for consideration in March.

For more information on the Carling-Bayview Community Design Plan and to review and comment on the results from the design charette, please visit ottawa.ca/carlingbayview.

Ottawa’s tallest buildings, highest density: coming to streets near you?

The City has just released a draft development plan for the Preston-Carling area, which includes the eastern section of the Civic Hospital neighbourhood. The central theme: major “intensification.”

Among the draft plan’s highlights:

·       -    It would allow construction in our own Civic Hospital neighbourhood of one 30-storey tower, five 25-storey towers, and one 15-storey building. That’s 170 floors of high-rise development (mainly condos), all to be clustered on the block of land between Champagne St. and the O-Train trench, north of Carling.

·        -  It says there should be a height transition from the towers “towards the surrounding stable residential neighbourhoods", but there isn't one. The maximum height of the “transitional” buildings on our side of the trench will be over nine storeys, putting high-rises adjacent to one and two storey buildings.

·        -    It recommends new road/bridge connections over the O-Train trench at Young and Hickory Streets, encouraging more traffic to flow on residential streets between our neighbourhood, Little Italy and points further east.

·          -  The plan calls for traffic calming projects throughout the study area. No details are provided.

·        -  It calls for “the provision of a sufficient and generous high quality public realm.”  That means traffic calming projects, parks, public squares, sidewalk improvements, etc.  It says the details “should be prepared and implemented through collaboration between the City and all stakeholders.” However, public realm projects appear to be dependent on money from developers.

·        -  It proposes expanding Ev Tremblay Park to include the lot to the west of the park on Champagne Avenue (where the Beechgrove Apartments are). It suggests making part of Champagne Avenue into a pedestrian-first area (cars must give way to people) to allow passage between the two halves of the park.

·        -  It  recommends the establishment of a new, large-scale federal government building complex in the green space south of Carling Avenue between the O-Train and Sherwood. This would eliminate a space that is currently used for recreation by the community.

So, what do you think?

The association is also encouraging residents to send comments directly to Councillor Hobbs and City planners. You can email Hobbs at Katherine.Hobbs@ottawa.ca and City planners at Carling-BayviewCDP@ottawa.ca

Whatever you think of the plan, NOW is the time to speak up!

Posted by Katherine Steinhoff at 5:56 AM 0 comments

Threat of break-ins is back!

On December 24th, a resident on Hickory Street noticed a man peering in her side door. The resident went to the door and asked the man what he wanted. He said he was looking for the O-Train but he had a small crowbar in his pocket, so she asked the man where he lived. He said "over there". The resident then asked him "what street?" and he repeated "over there". It looks like some people are taking advantage of the holiday season. Take care and take precautions:

Dos and don'ts
•       Lock your doors and windows.
•       Don't let newspapers or mail pile up if you are away.
•       Tell your neighbours if you are going to be away and ask them to keep an eye open for anything unusual.
•       Report suspicious persons.
•       Do not open your door to strangers. Call 311 to report incidents. Call the police to report theft. Call 911 if there is a crime in progress or a life threatening emergency.
•       You can get a free home security check from our community police officer. His name is Constable Milton and his email address is MiltonA@ottawapolice.ca.
Posted by Katherine Steinhoff at 10:05 AM 0 comments

I received the following note from a resident:

"We were made aware of a suspicious behaviour on Ruskin at mid-day around in early August with a 20 year Caucasian man being caught peering in the window of a backdoor. There were two other suspicious older men observed that day possibly checking out the neighbourhood.

There was garage theft on Fairmont on July 26.

We spoke to Constable Milton, our neighbour policeman and he said that there was a break and entry on Gwynne  (reported in more detail on http://chna4u.blogspot.ca/ ) and Bayswater Place on July 3.

On July 9 there was a theft from a car on Ruskin (hospital property).

It is really important any theft (even cars left unlocked) be reported to the police and community.  Sharing this information enables all of us to protect our homes and our neighborhood.

There is a lot of good information on how to make homes and neighborhoods more secure below and at the blog noted above.  Sadly enough security is not about making your home perfectly secure, just harder to get into than others.

According to the police, you can minimize chances of your home being broken into:
Posted by Amanda Farris at 5:50 AM 4 comments